Our last few days of the summer holidays this week. I’ve spent a bit of time on the allotment but it’s only been the odd hour here and there as I wanted to do some days out with Louis before we return to the routine of work and college.

Louis wanted to go to the cinema. The only thing I could find which I thought he might like that we hadn’t already seen was the new muppet movie ‘The Happy Time Murders’. It’s rated 15 and I’d seen the trailer and it looked quite funny so, off we drove to our local cinema, stopping at Tesco to pick up some snacks and drinks (pay £12.50 for a box of popcorn and a drink at the cinema when I can buy the same at Tesco for about 3 quid? I don’t think so!) There were only 6 of us in the cinema. A young couple who sat right at the back, what appeared to be a grandmother and her teenage grandaughter a few rows in front of us, and us. We sat through the obligatory 20 minutes of adverts and trailers and then the film started. Well, I knew it wasn’t going to be ‘A Muppet Christmas Carol’ but this was something else! I, generally have very little objection to swearing –  a well placed swear word can add humour and show emphasis, but they were dropping the F bomb every other word and I’m not sure I will ever be able to erase the image of what the 2 muppets did on the office desk! The only thing that could have made it worse would have been if it had been Kermit and Miss Piggy! So, Louis and I had, possibly the most awkward couple of hours we have ever spent in eachother’s company and we shall never speak of it again. The next day we went to the Harry Potter studio tour – no awkward surprises there! 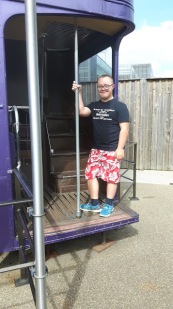 Meanwhile on the allotment I’ve continued to dig. As I said, I’ve only been to the allotment a few times this week and haven’t spent very long down there but each time I’ve been, I’ve worked on the area in front of the peppers. I’m making slow but steady progress and today I reached the end of the pepper bed and the beginning of the brussel sprout bed. 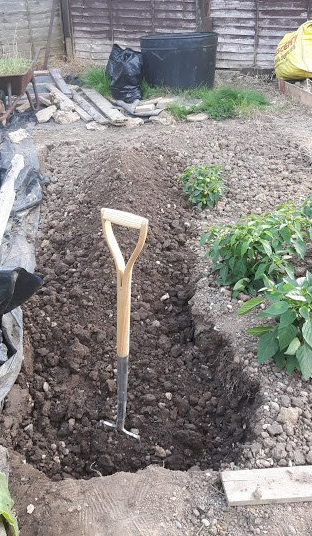 I think the brussel sprouts are doing ok. There seems to be some new growth which hasn’t been eaten so I think the netting is working so far. The netting makes taking photos a bit difficult though – I had to get on my hands and knees to take these.

I definitely have new growth on both the butternut and the Turks Head squashes. Despite the plants looking like they’re on their last legs – lots of the leaves have mildew and are dying – it looks like they’re still producing veg.

I had a quick search under all the leaves and found some tiny butterbut squashes (they look so cute!) and quite a few Turks Head squashes. I thought the courgettes had stopped producing anything other than big leaves (phew!) but I found another courgette. I picked it while it was still small – not sure I’d know what to do with another marrow; I still haven’t used the ones I already have.

I pulled up a few carrots to make carrot soup (Louis enjoyed the last batch I made and anything I can do to encourage him to eat more veggies I’ll do) Some of the carrots were so spindly they went straight into the compost bin but there were a few decent sized ones I can turn into a soup.

I also harvested some more tomatoes. I took them into work for my mid morningsnack. So satisfying to know I grew them (well, I helped Dan grow them) and so flippin tasty compared to shop bought. Genuinely the difference is unbelievable. I absolutely love tomatoes but I have a real problem growing them – I can’t stand the smell of them while they’re growing. I am going to have to learn to ignore or get used to the smell because I can’t not grow tomatoes – I eat so many it would be silly not to. How silly would I look with a clothes peg on my nose do you think?!

The peppers are still doing their thing. We still only have one orange one but I’m happy with how they’re doing. One of them is almost big enough to pick. It’s still green so maybe it won’t change colour. The once a week feeding seems to be working. 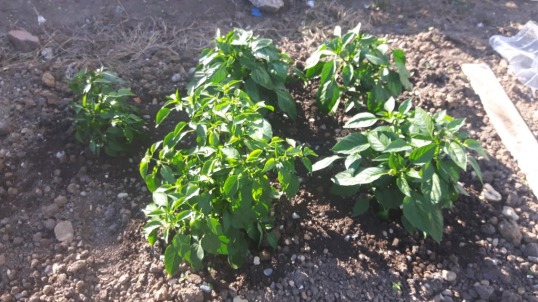 I’ve started another #100dayshappy on Instagram. I really enjoyed it the first time I did it so I thought I would give it another go. My first post was my new takeaway mug bought for me by my friend J. after she heard I had dropped and smashed the last one I had. This one is made from bamboo so, not only is it better for the environment but also won’t smash when butter fingers here drops it. I can now take a cup of tea down to the plot without burning my fingers because the mug is far too hot for anyone who doesn’t posess superhuman heat resistant abilities in their fingers (sort it out Greggs!) or worrying the mug will smash if I drop it. Thanks J!

After the cafe on Saturday J. and I went for a drink. Following on from my monumental headache last week I’ve decided to try and drastically reduce the amount of caffeine I drink. I normally drink Jack Daniels and Diet Coke but, in my attempt to try and reduce my caffeine consumption I felt I needed to give a new drink a whirl. You may remember, while I was in Cornwall I had a rhubarb and ginger gin, so, in the pub yesterday I opted for a rhubarb gin with lemonade (as recommended by the barman) No caffeine and it really was very nice. I am going to have to look into how you make rhubarb gin (is it as simple as chucking some rhubarb in some gin and leaving it for a bit? Oh I do hope so!) as it’s looking like I may have quite a lot of rhubarb next year and, seriously there is only a certain amount of rhubarb crumble anyone can realistically make.

Talking of Rhubi – I’m slightly worried about her. At the beginning of the week she looked great. I specifically noticed how lovely she looked – her stems were particularly upright and she looked much taller than normal. In the last few days she seems to have wilted a bit (can plants miss you? haha!) I gave her some feed when I watered her – hoping that will perk her up a bit. I did say last week she was getting a bit cocky, didn’t I? 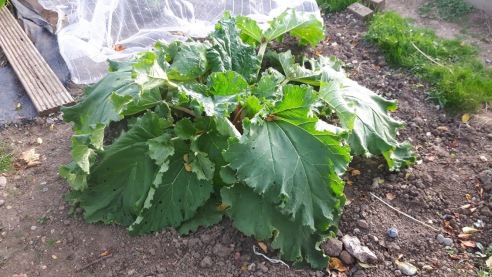 The sunflower still looks beautiful and is still attracting the all important bees. The smaller of the two flowers has definitely finished flowering and I need to start thinking about taking the seeds out.

As ever, here’s what the plot looked like this time last week:

and here’s where we are this week: