The big news this week is, I’ve finally been able to lift all the blue tarpaulin off the extemsion! YAY!

I had a completely free day on Thursday, so I popped to the allotment at lunchtime to continue digging and clearing the extension. It didn’t take long before I needed to pull back more of the tarpaulin and, when I looked I realised I was close enough to the back wall to just pull the whole thing up. So it’s gone! 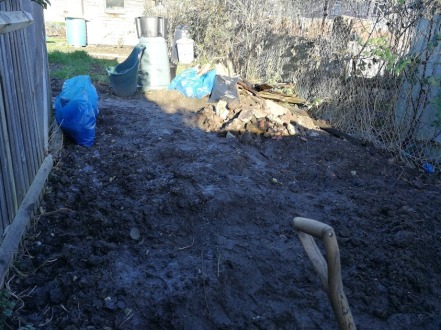 The extension looks so good now it’s not covered in swathes of blue plastic and I can finally start to see how big it is and what it might look like with plants growing in it. I haven’t made a final decision about what I might grow there yet but I’m liking Michelle’s idea of allowing the pumpkins and squashes free reign!

As I was lifting the tarpaulin I could hear a robin. It sounded so close but I couldn’t spot it until I realised it was on the ground about 2 feet in front of me. By uncovering all that  ground, I had exposed loads of worms and bugs and the robin was just making the most of it – smart little bird.

After I’d removed the tarpaulin I even made an impromtu trip to the tip (I really know how to live don’t I?) I’d filled 3 rubble sacks and there was one left over the ‘rubbish man’ didn’t take because I hadn’t sorted it. I was a little reluctant to take the sacks as I’d only just had the car cleaned (it’s due in for a service next week and, honestly I would have been embarrassed to let the garage see how dirty I’d let it get) and it looked super sparkly but, the rubble sacks weren’t too dirty and I did promise I wouldn’t let the rubbish build up again so I just had to suck it up and take them.

I like this time of year as I start to notice the evenings slowly becoming lighter by a few minutes each day. I spoke to my helper number 2 on our way home from college the other day and explained we may be able to start going to the allotment again in a few weeks when it will still be light until around 5pm. He was totally up for it and even sounded quite excited. I’m looking forward to showing him the progress we’ve made in the extension.

I met Michelle on the plot on Sunday morning. It was bitterly cold again and there was a definite frost (I was right to cover Rhubi – I do get some things right sometimes) This was ice that had formed over the water in one of the containers on the site.

Michelle didn’t have much to do on her plot so it wasn’t long before she appeared in the extension wielding her fork offering to help me. And boy, did she help! We started by having a go at the ivy in the far corner of the extension with secateurs (Michelle) and sheers (me) I believe our choice of tools tells you quite a lot about both of us! Between us (Michelle carefully cutting with her secateurs, me hacking away at it with the sheers) we removed as much of the ivy as we could without damaging the fence (best not to annoy the neighbours I guess) Ivy is an absolute bugger! It sticks to things – am I the only person who didn’t realise this? Immensely satisfying though, pulling the stuff off the fence and finally completely uncovering the back wall. 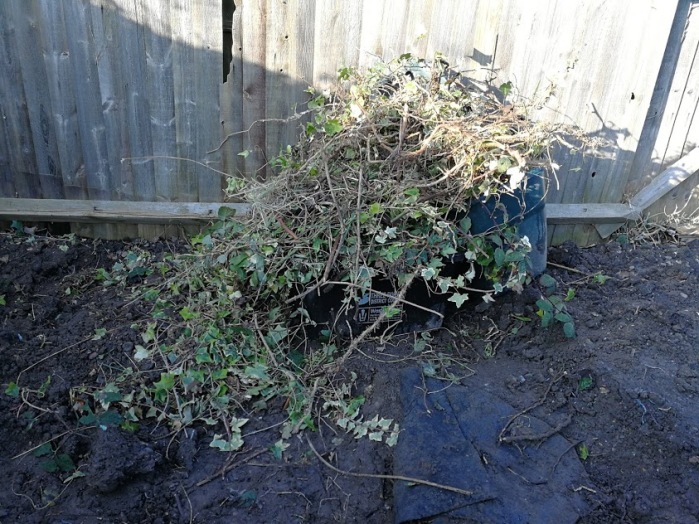 The rubble pile is growing and I think I’ll need the ‘rubbish man’ much sooner than I anticipated. This is a good thing and quite a surprise to me. Infact I almost can’t believe I’ve made it to the back wall in less than a year. I genuinely thought it was going to take 2 years to dig the whole plot. Go me! (and Michelle) There is still a bit more digging left to do – I know I haven’t cleared all the roots and rubbish yet but the vast majority is done and I can’t even begin to tell you how relieved I am about that.

We’ve had glorious weather this last week which has made it so much easier to spend time on the plot. I’m told that will all change next week as it’s due to become much colder and possibly snow. Glad I made so much progress this week as, if the predictions are correct I won’t be doing much work on the plot next week. 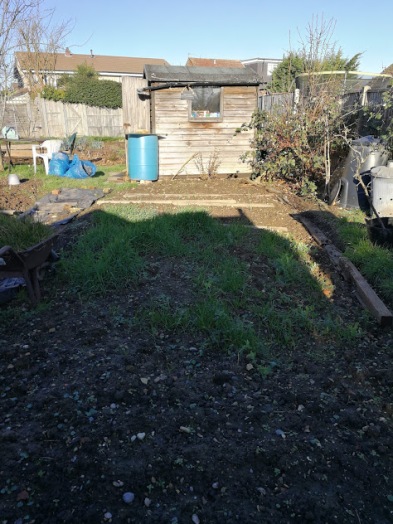 During clearing the extension I came across some bulbs. Michelle thinks they may be bluebells but they could just as easily be crocuses or snowdrops. Unfortunately they were next to a bramble root that needed to come up and if I’d left them in situ they would have been damaged so I carefully dug them up and re-planted them. Hopefully they’ll survive and we’ll see a bit of extra colour against the already colourful mural. 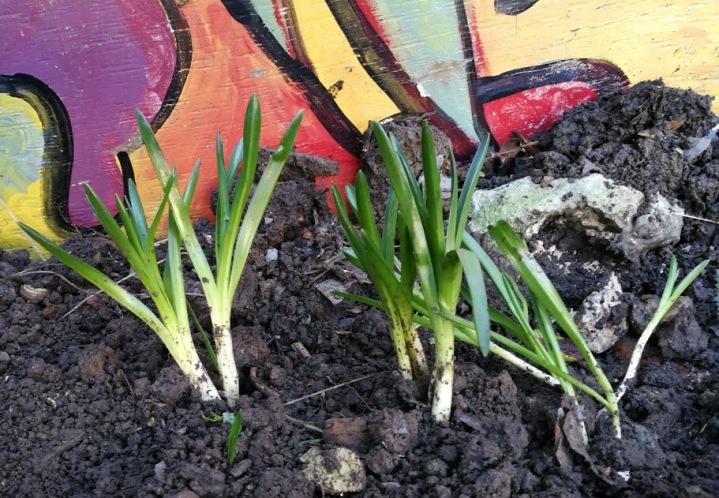 One of the benefits I’ve noticed from working on the allotment over the last year is I’m becoming a bit fitter. This has encouraged me to make other positive changes around my health and I’ve started the ‘Couch 2 5k’ challenge. Louis and I attend a track club every Friday night. I normally walk round the track but I’ve started running with the help of the C25K app and Sarah Millican – I chose her as my trainer. She’s very encouraging but I was expecting more jokes. I paused my run for a couple of seconds on Friday night to take this photo of the sky.

I am so pleased to show these 2 comparison photos – the first from last week and the second one from Sunday, after Michelle and I had spent around 2 hours working to clear the ivy and the last of the rubbish covering the back wall. 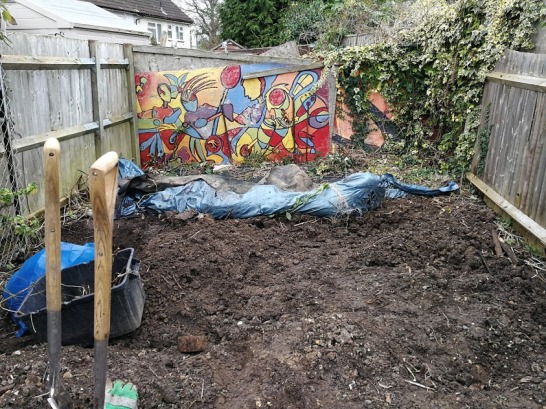 This is what the plot looks like from the normal view. The job for (possibly) next week is to look at installing the second water butt.